Reposting a link here to Willie Nelson’s interview with Dan Rather, during which he discusses his recent stem cell treatment in passing (and says it was worth it, despite the pain).

It will cost you two bucks if you want to download it and judge for yourself about what Willie thinks:

Thanks to another SOB’er  for pointing it out to me, because I was scouring the net in the hope I’d hear more about his progress now that he’s at the 6 month mark, post-surgery.

I’m not asking for unlimited time on this earth… What I am demanding are treatments with less damaging side effects, and the freedom to try new things that might work better than conventional means.

I’ve always been at the forefront of innovation, a single, independent woman, working for companies focused on intellectual property, digital media revenue streams, reduction of design lead times via computer aided design to bring the time-to-market for new products from 3-5 years down to 18 months or less…

I come from a long line of people, and especially strong women, who are rule breakers and see no value to following rules just because it’s the way something’s always been done.

Heck, if I’d listened to my childhood programming about my expected role in life, given the fact that my COPD is based on a birth defect that could have killed me at any time, I’d have been another version of the tragically romantic daughter in Steel Magnolias.

I’d have married, had 2-3 genetically-risky kids, and still be living in a tiny town outside of Boston, reading, and hoping to see more of the world – someday – after the kids were raised, and if the combined medical expenses for me and them didn’t break us financially to leave us in poverty.  If my honey and I made it to retirement (at 67-70-ish), only then would I have been able to spread my wings and finally traveled, seeing the world for myself.

What many of us seem to forget is that we never get enough time in this world, with the people we love and who love us, just enjoying each other and the wonders all around us.

I strongly feel that stem cell treatments may offer an opportunity to add another chapter to my life, even if it doesn’t change the eventual ending.

If the average life span survival rate following a lung transplant is 3-5 years before quality of life again declines, is it any wonder I’m not seeking perfection from a stem cell treatment?

Willie looks like crap in the pictures I took from the interview.
He’s 82, so it’s reasonsble there’s been a bit of wear and tear. 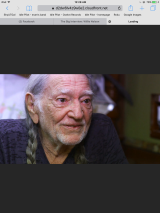 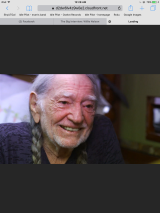 But, if he’s giving the treatment a thumbs up, it’s another piece of data to consider as I evaluate my quality of life options moving forward with this worsening disease.

Naysayers have their place, but not when they cite lack of regulations or government approval before considering a treatment. Not when it’s the same government that used to promote cigarette smoking and rule out canabis – completely ignoring its medicinal benefits. Medical science and breakthroughs are not all black and white to my way of thinking.

So, here endith the rant. I know I won’t change anyone’s mind that believes stem cell treatments are all smoke and mirrors, but I wanted to put my dissenting thoughts out there.

For now, I’m putting away my soapbox, and hoping all you SOB’ers * have a lovely day.